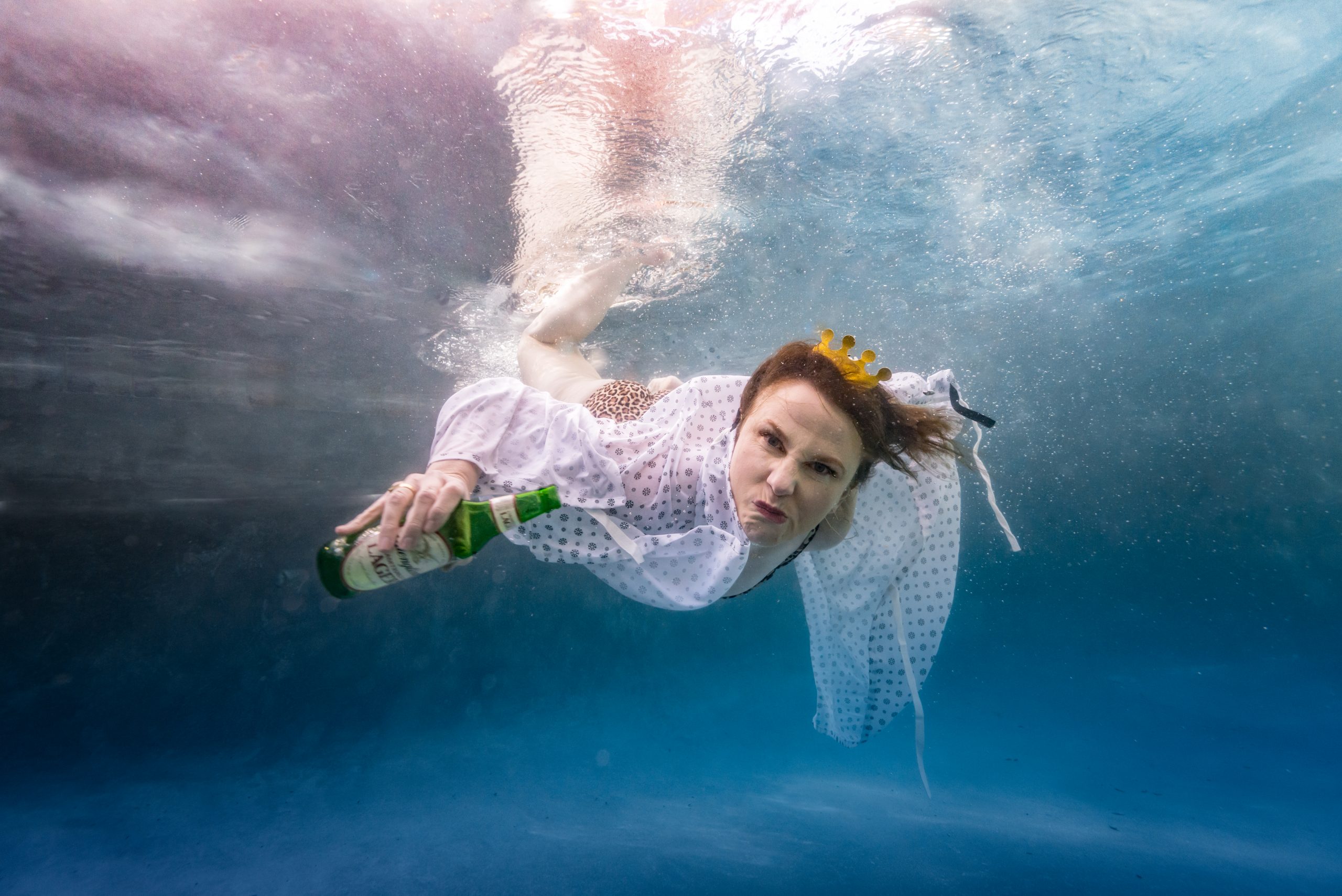 From starring in popular shows such as Two Broke Girls, How I Met Your Mother and The Comeback, Katierose Donohue Enriquez is taking it solo as she goes on tour for her one-woman show Queen of Fishtown. She’ll be traveling across the USA and the UK.

Recently, she just completed a hugely successful run of QoF at the Hollywood Fringe Festival (The Broadwater), Philadelphia at Plays and Players and the King’s Head Theatre in London, Islington (31st July and 1st August). This all occurred before taking it up to the Edinburgh Festival Fringe (5th – 28th August) at Paradise Green. Then post-Edinburgh Fringe, she’ll be flying to New York for United Solo at the theatre row 42nd street, off-Broadway.

Expressed as a ‘solo show filled with hope and profanity’, Katierose goes in full depth with the story behind the brilliant, humorous masterpiece, Queen of Fishtown. 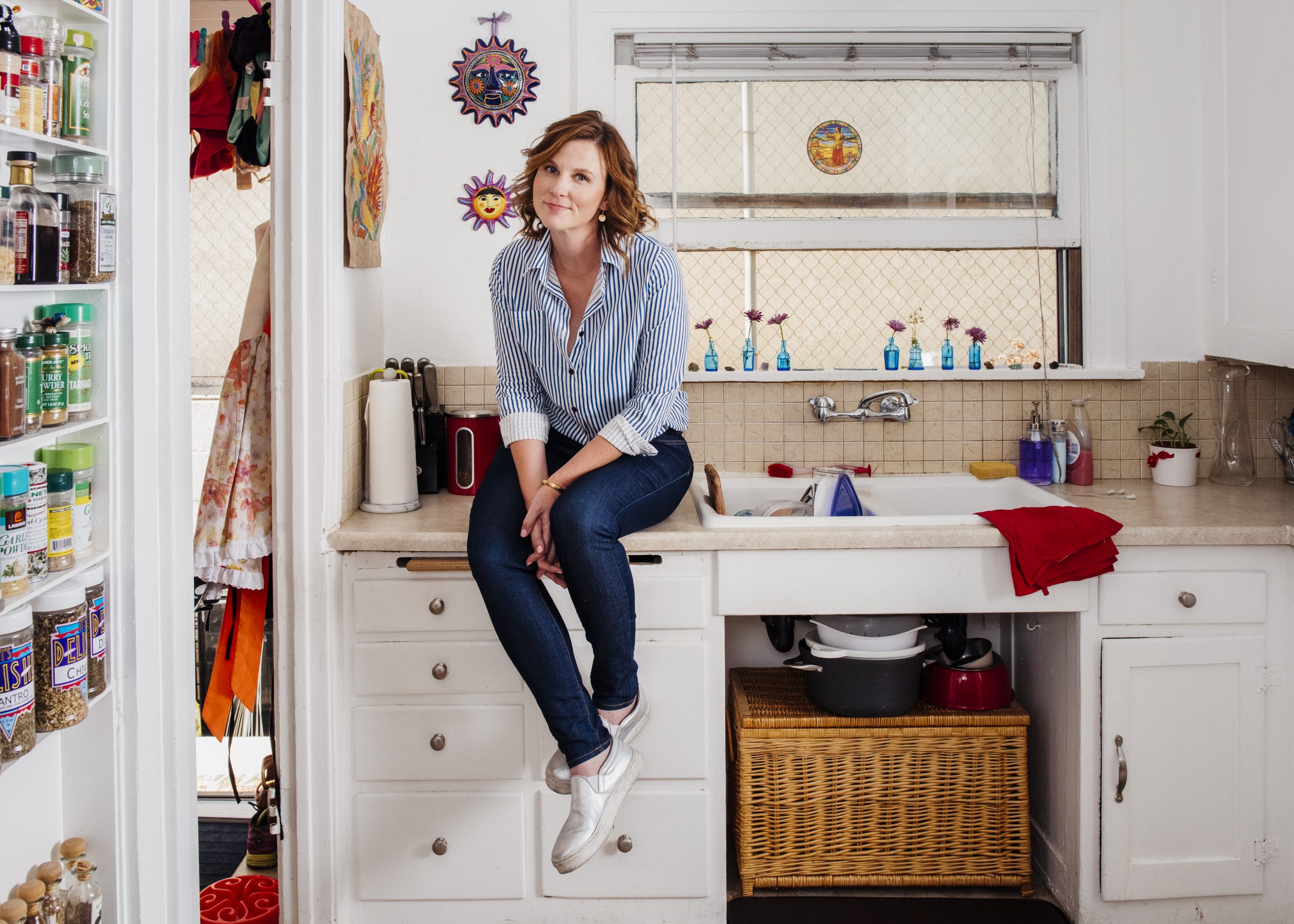 Raised in New Jersey, I’m interested to know what inspired you to set your one-woman show in Fishtown, Philadelphia. Does the town hold personal memories for you or is it symbolic of other aspects of the show and Kathleen Burke herself?

Philadelphia is a short hop across the Delaware River and would be considered the “home city” for anyone who grew up in South Jersey, the garden part of the Garden State. My dad taught high school in the city for 35 years and grew up in the Harrowgate/Port Richmond neighborhood. As for my mom, her family lived in the Frankford neighbourhood.

Fishtown is located in between those two areas, and a lot of cousins grew up there. I spent weekends and holidays there playing at Amber Playground. It’s said that the neighborhood was undesirable for roughly a hundred years, in contrast of my family (both sides) resided there. However, over time, my parents and their siblings spent their lives “getting out.” Though funny enough, my cousin Stephanie and her husband, Rich, bought a place in Fishtown back in 2011. Everyone in the family thought they’d completely lost it! But jokes on them, because in 2018 Forbes Magazine called it “the hottest neighborhood in America.” It is just wild.

When the Philadelphia Eagles went to the Super Bowl in the 2017 season, we were called the underdogs so much. However, we just embraced it. Even if everyone was barking and many (including the players) sported dog masks, we managed to DESTROY Tom Brady and the Patriots with our backup quarterback, Nick Foles. And not to brag, it led to the greatest play of all time called The Philly Special. Along with that evergreen underdog spirit, we have a chant in Philly: “Nobody Likes Us and We Don’t Care!”

This attitude permeates everything and everyone in Philly. It’s an ongoing joke that we use un-ironically and with pride. Philadelphia is one of the most historical places in the United States. And there are so many characters full of life, regardless of overlooked, misunderstood, and rarely appreciated they are. It gets frustrating when people overgeneralize anyone from Philly with “unhealthy food, mean sports fans, and Rocky.” Meanwhile, it is literally the birthplace of America. You know, Declaration of Independence, Bill of Rights, Constitutional Convention, Liberty Bell? And somehow the Dallas Cowboys are nicknamed “America’s team?” I mean, seriously?! Come on! F*ck the Cowboys!

The world is changing, and so is the city of brotherly love. I don’t know about you, but in my family, change isn’t an easy thing to do. I wanted to conceptualize and play a strong, funny woman, who eventually learns the importance of self-care and that vulnerability isn’t a bad thing. She’ll tease her new bougie hipster neighbors all day long, but she can also admit she has an appreciation (maybe even a little jealousy) for them.

Your creativity is brilliant. What is your main source of inspiration for creating and writing your own authentic characters?

Creating characters has always been my thing! During Halloween when I was a kid, I wouldn’t just have a costume. There would be a whole spiel and story to it! Props and monologue included at times too. Due to my love for these characters, creating these other lives to inhabit, I have known that I wanted to be an actor and entertainer since I was about 11.  Throughout my life and career, I have always created my own work.

Once I graduated with my MFA in Acting from The American Repertory Theatre’s Institute for Advanced Theatre Training at Harvard University and the Moscow Art Theatre, I was desperate for comedy. Heck, even the title of the program is exhaustingly dramatic!  So, upon moving to LA, I was quickly studying and performing sketch and improv at The Groundlings Theatre.

Eventually, I was invited into the Sunday Company there where we write and perform a brand-new show every week. That was a time, especially when I got to try so much and write even more. I’m quite sure that the main idea for “Queen of Fishtown” was born in a sketch I performed there one Sunday night.

What inspired your costumes for the play and how do you think the costumes help to portray the individuality of each character?

It’s funny because looking back, I remember the Hollywood Fringe. They’d have a fashion catwalk competition, bur I never intended to enter any of them because so many shows have such fabulous and intricate costumes. But like with any fringe, more people would see and watch you, which meant more and high ticket sales. Thus, I signed up.

And let me tell you, IT. WAS. AWESOME! I marched down the runway in character, picking fights along the way with a cigarette on my lips and a pizza box in hand. The crowd LOVED her. The titular Queen here is a “basic bitch.” Kathleen Burke, who’s not so fancy and likes to dress comfy like a lot of moms. She sported a pair of blue-camo joggers with gold zipper pockets, a hot pink t-shirt, high-top black Puma sneakers, and thin gold heart shaped hoop earrings. But to top it off was a sparkly hair clip – I like to think that’s her “crown.” 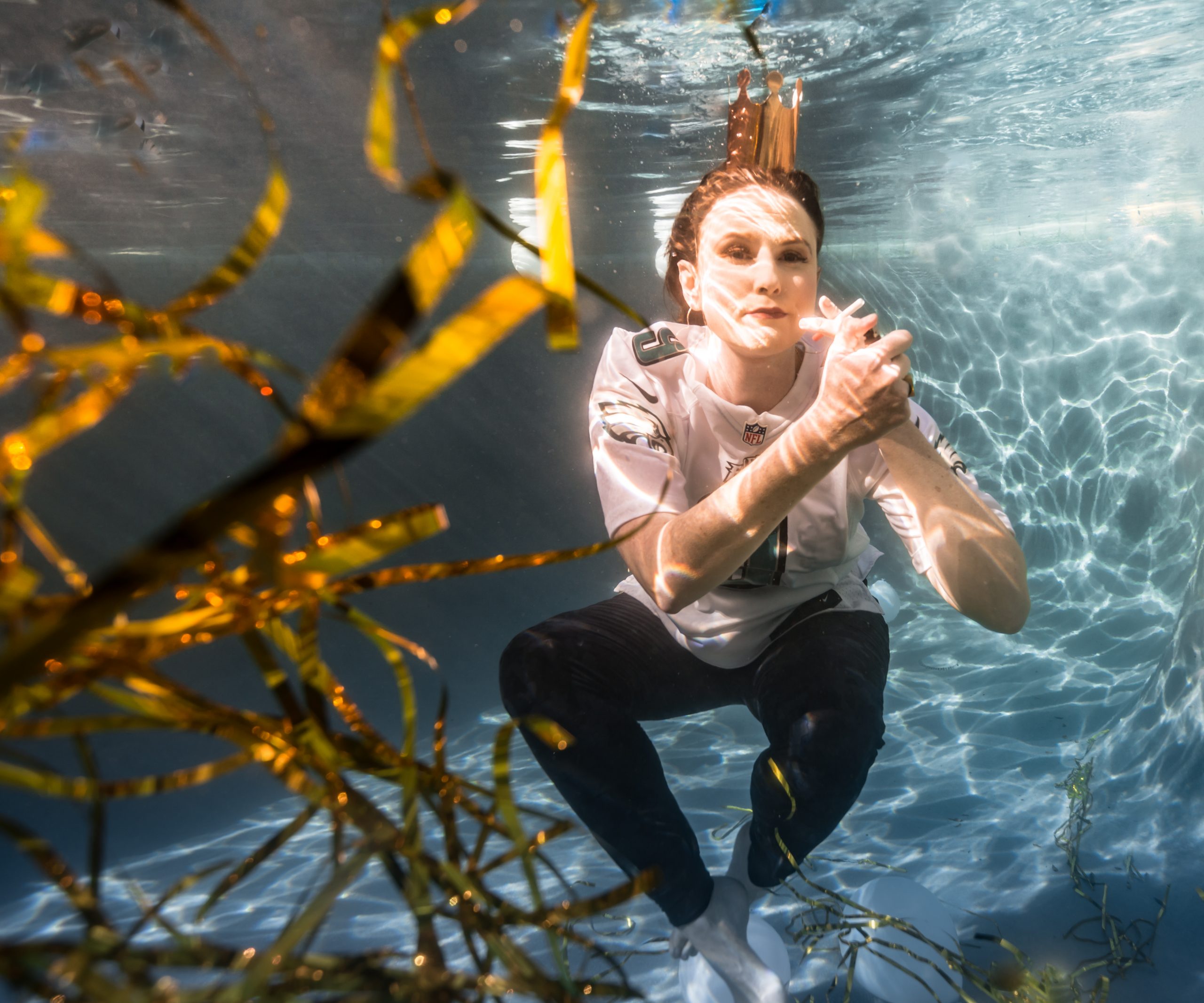 Inspired by Podell’s praises on your ability to be ‘corny’ but also bring ‘humanity to a certain type of woman that is either ignored or written off by society’, I feel your play addresses a stereotype where women can’t be powerful and liked at the same time. Do you think your play highlights some of the day-to-day struggles as a woman in society?

I love my director, Corey Podell! We met in level one at The Groundlings School in 2006 and collaborated numerous times over the years. I contacted her last October, inquiring if she’s willing to build this show with me. And thank goodness, she answered with a resounding “YES!” If not for her, I don’t believe the show.

And to answer your question about highlighting day-to-day struggles for women? Oh absolutely!

Like, that’s kind of the point of it! Kathleen’s a force of nature. And like MANY women, she is also unintentionally tied in knots. Similar to the airplane instruction, wherein you need to put your mask first before others during an emergency, it’s RARE for a woman to do that. 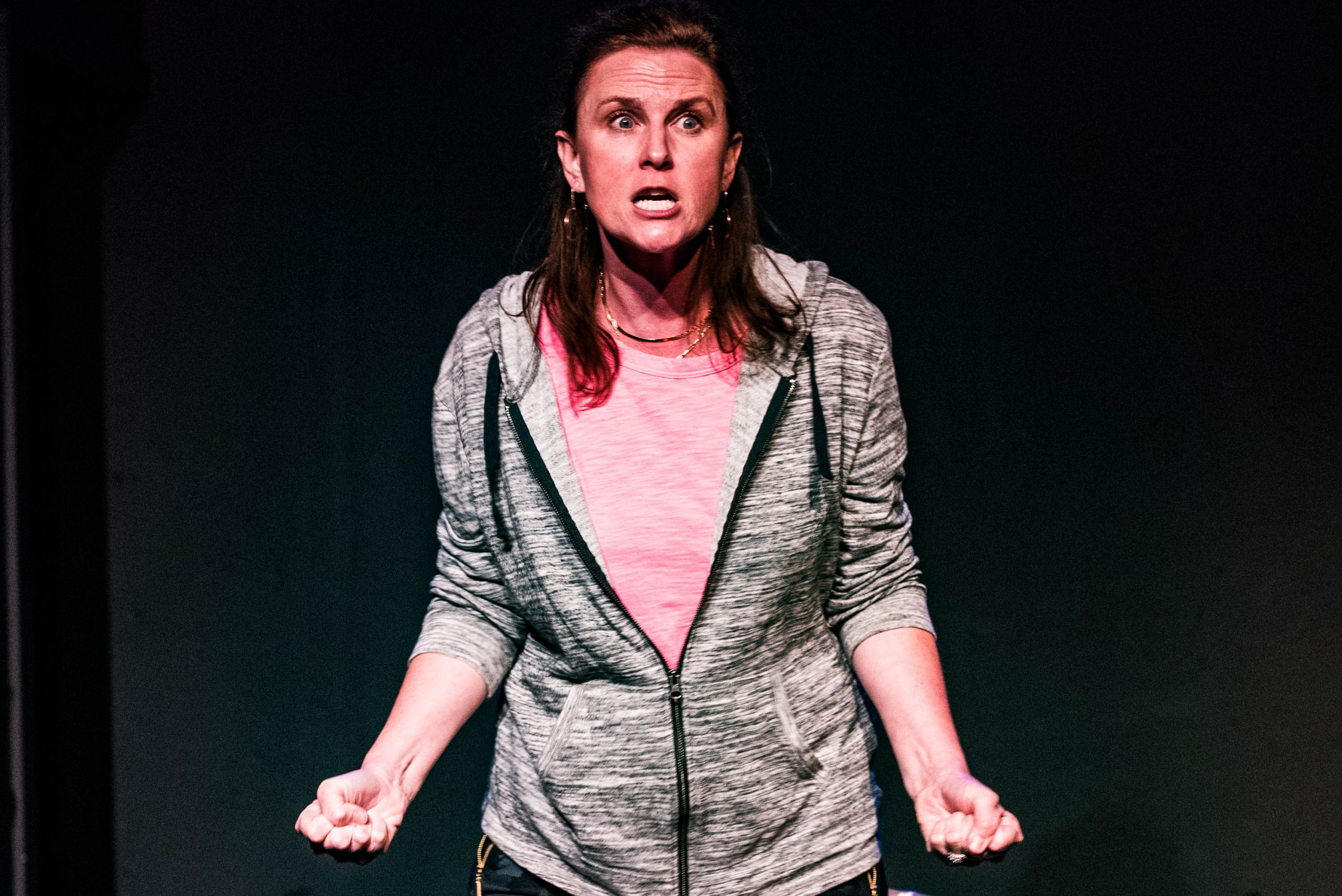 With your ability to add depth and meaning, alongside humour, do you think your play will empower women whilst also encouraging them to not take themselves too seriously? Is this the type of message you’re hoping resonates with your audience?

Most importantly, I am hoping that people are entertained! To add, I’ll be playing ten characters throughout the show.

I hope they enjoy spending time with Kathleen and her family, and learning more about the idiosyncrasies of Philadelphia! As a storyteller, I like making art that’s both comedic (nope to making a “Ted Talk Comedy) and with an overarching message.

The show is all heart, and I loved telling it. It’s funny. It’s authentic. And most of all, it’s a love letter to my home city, Philadelphia, and to frustrated women everywhere.I’d like the audience to exit with a sense of renewal. I want them to feel refreshed that they’d take a look at their own life, checking where they might allow change to come a bit more easily? I wish they celebrate the idea that you can learn, grow and feel your feelings without losing your authentic sense of self.

Other than that, I hope people can listen when someone needs to be heard. It would be extra amazing if audiences leave with a curiosity about Philly. Perhaps they’ll tune in to watch an Eagles game, book a trip to see the Liberty Bell, and maybe even come to understand why someone is yelling “nobody likes us and we don’t care”. Maybe, just maybe, it’s because they are as integral as they are overlooked.